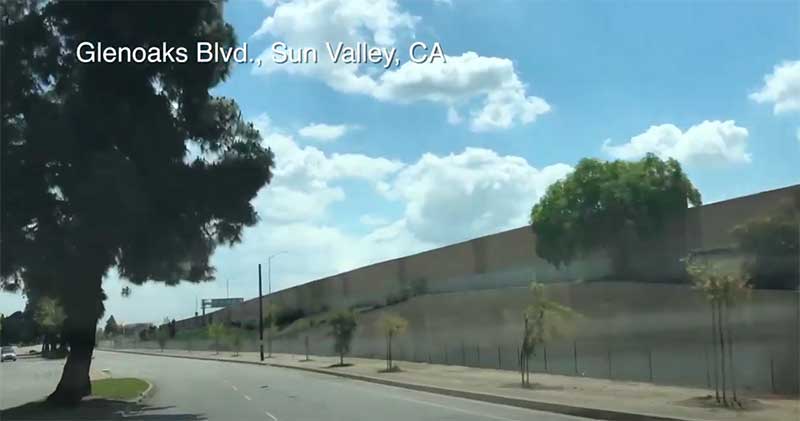 Jose Mier driving the streets of Sun Valley. On my most recent outing I drove through Sun Valley from Pacoima to Burbank using Glenoaks Blvd. Because Glenoaks parallels Interstate 5 and because there are a number of on and offramps to the I-5 from this street it’s usually bustling with traffic. This is early April and we’re in the third of fourth week of our stay-at-home orders and it’s definitely having an effect on our Sun Valley traffic.

While I’ve documented that parts of Sun Valley are still active, by and large the big streets are often empty. That was the case the day I drove through our community. Glenoaks Blvd. is a long stretch of road that makes a path from Glendale at the southern end to the 210 freeway near Stetson Ranch Park at its northern end. It passes through the Los Angeles communities of Sylmar, Pacoima, Burbank and Glendale.

To limit my observations I chose only the section that goes from Pacoima through most of Sun Valley just to the Burbank border (near Woodbury University). It was a weekday in the middle of the afternoon. Traffic was really light so much so that stretches of Glenoaks were almost empty.

The fact that this usually busy street was devoid of cars (and trucks) makes me anxious about the state of Sun Valley’s economy. We know restaurants are having a tough time and that so-called “essential businesses” like pharmacies and grocery stores are still open. However, Sun Valley is made up of much more than those two types of businesses and the number of cars on the road suggests that our shuttered places of business is reducing traffic across the board.

Except for me there were few cars on the road at a time when traditionally Glenoaks is full, especially at freeway-close intersections like the one at Hollywood Way.

I look forward to the time when traffic picks up again, whenever that may be. I might even be grateful for the return of horrendous L.A. traffic when it happens!