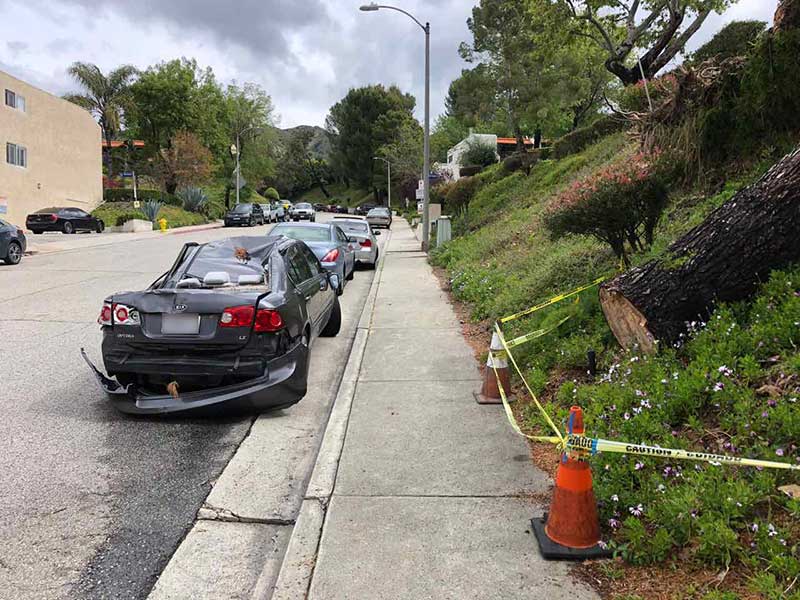 The recent March and April rains that have blanketed Sun Valley and the rest of the Southland have brought some benefits as well as some unexpected danger. Previous to this bought of wetness we were going through a drier than normal January and February.

However in March the rain started coming and we had subsequent days of it, upping our rainfall totals for the year and lessening the drought conditions throughout Los Angeles County.

Rain can bring unexpected results, some not so good. Case in point: I was recently driving through some Sun Valley neighborhoods which included Cabrini Drive. While leisurely driving up the hill toward the foothills I noticed a car parked on the side of the road. The back bumper was hanging off and the back window was smashed. The entire roof of the car was flattened.

At first I thought it was the result of a crash and that some other negligent motorist just happened to collide with the parked car and that the owner left the car in place until it could be removed.

The successive days of rain must have loosened the roots sufficiently to bring the tree cashing down and smashing the car in its place—a prime example of being in the wrong place at the wrong time.

While we certainly need the extra rain that these storms have brought to Sun Valley, it reminds us that wet weather can bring unforeseen consequences like this, but it’s also a reminder to take it easy when we’re driving in the rain.

A recent news article reported on drivers making the trip across the United States in about 26 hours due to less traffic on the highways during the coronavirus shutdown. It’s never a good idea to speed excessively and especially with our heavier than normal rainfall, we need to be mindful when driving the streets of Sun Valley.