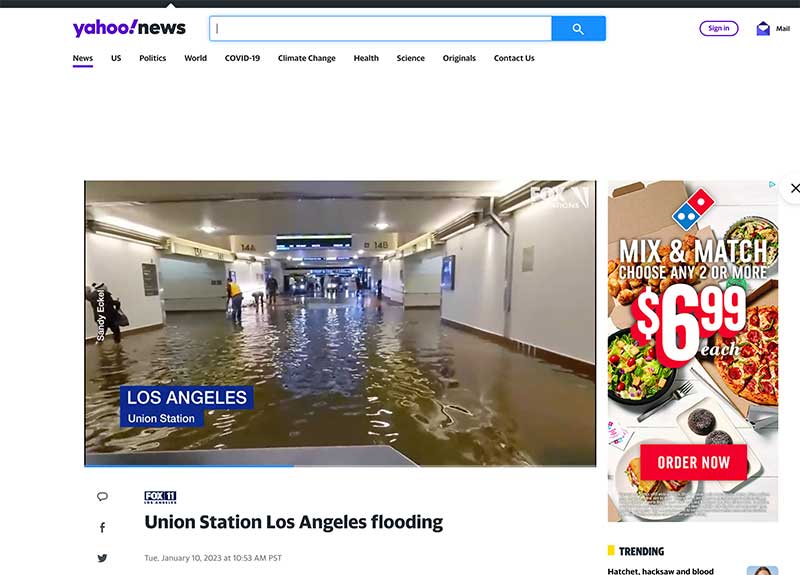 In the Sun Valley neighborhood of Jose Mier you’ll find a lot of flood damage due to the rain from January’s Pacific storms.  Like most of California this portion of Los Angeles is not immune to the ravages of weather. While things are a lot better than they were in years past thanks to noon drainage and cisterns have been installed in around Sun Valley, we here are just as vulnerable is our neighbors in downtown Los Angeles.

January 2023’s  and Seemingly unprecedented storms are making Angelenos deal with things that they rarely if ever have had to deal with. Case in point is the flooding of Union Station downtown. Can you remember the last time this area was flooded to such extent? I can’t. Other parts of the San Fernando Valley have also been hit hard by in almost constant wave of bad weather over the last two weeks, washing out roadways, creating sinkholes enforcing people in automobiles to have to be rescued.

If you recall our last big fire Valley area was in 2018 and it turn the Verdugo Mountains from two hunger all the way into Sun Valley near Cabrini Park. Because of this there’s not as much vegetation on the foothills as there was previously and as the case is in cities like Montecito, there is the potential for mudslides in areas that have been affected by fires.

This is a problem which Californians face every few years and you would think that we have gotten used to it or would have learned to prepare ourselves better for it. However, it something that never seems to happen. I think we get complacent with all the dry hot weather and lack of rain throughout most of the year– Bed with years of drought you Become even more complacent.  Now however we’re paying the price because we’re being inundated by storm after storm.

Also surprising is the fact that we aren’t doing much to capture Rainwater in times like these which would go along way to alleviate Californians drought and water problems. So for the time being we get hit with storms like this the only thing we can do is try to navigate around streets which is been affected by flooding in wait till the waters received and then get back to our “normal”  Life of dealing with drought conditions year after year.

So as far as Sun Valley’s concern what are some concrete things that we can do with the even more rain that is on its way? For me, Jose Mier, I avoid the far right lane Interstate five between Burbank Boulevard in Penrose Northbound. Also there are neighborhoods Northeast of Glen Oaks Boulevard– For example around La tuna Canyon that get particularly hard hit by rains  so if I don’t have anything to do those areas I’ve for those as well. However, it’s saddening to think that all the water that we are avoiding could be captured by either some governmental agency or by individual homeowners For later use,  but at this point it’s not.

Regardless, for the time being let us all in Sun Valley take precautions and not get stuck in any of the upcoming flooding that is sure to take place later this week when more rain hits the southland.